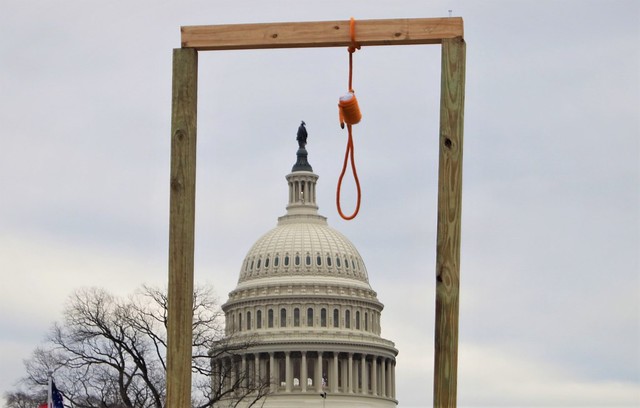 It’s been a moment. About five exhausting years of moments. A telescoping sequence of “oh my god” moments, from Muslim bans and kids in cages and Charlottesville and Pizzagate–ha ha, remember that goofiness? ha ha, so weird–to ever more urgent signs of imminent climate catastrophe, to a mishandled pandemic to gamified delusional bonding online to a mass uprising against state violence against black folks to open insurrection by a flag-waving white supremacist alliance. The attack on the Capitol seemed like a bizarre season finale, broadcast live, that got more and more real as the media created by the insurrectionists to memorialize their moment was scraped and assembled. It was so much worse than it first seemed, than we could at first believe. And it’s far from over.

One phrase I hope gets retired at last is “this is not who we are.” If we can’t admit this is who we are and who we’ve always been, we can’t be who we–a majority of us, at least–want to become.

The president Americans elected uttered the words “white supremacy” in his inaugural speech. Republicans are outraged. How dare he not moderate his speech? How dare he be divisive? The politicians who rode in on “he tells it like it is” because it allowed people to express bigotry openly, and because that crudeness and divisiveness recruited people to their party, are furious because they assume when Biden says “white supremacists” he’s talking about them.

Whew, is that a major self-own or what?

So much bizarre cosplay to blur the boundaries between reality and invention, between who we are and who we pretend to be. The Klan wore robes. The neo-nazis and boogaloo bois and white nationalists wear military gear and guns. Shitposters with guns fly the Nazi-inspired flag of Kekistan, an imaginary nation for weaponized lulz. Then there’s Q, a gamified meta-conspiracy theory, hyper-pattern recognition turned Manichean mass delusion. Trumpists carry a lot of flags and play dress-up and use not wearing a mask in public as a “fuck you” statement, just to own the libs.

Nobody’s going to tell me what to do even if it kills me. And you. And your grandparents. And the people who harvest our food and cut our meat and stock the shelves and deliver our meals and take care of the sick and elderly. Asking me to care about those people? That’s tyranny.

So much of the damage of the past four plus years (and hell, the past four centuries) has been caused by defining “we, the people” as a category that excluded others. That limited, exclusionary “we” that only counts white folks is–as a factual matter of demography–not who we are anymore. And that reality enrages a lot of white Americans.

And yet . . . a majority of us recognized Trump was a blowhard conman. Tens of thousands of Americans responded to George Floyd’s murder with appropriate outrage and clamor for change. Most Americans wear masks because they don’t want to kill other people. It’s not hopeless.

But we need to tell ourselves the truth about who we are. We need to understand our history (not the crude propaganda version) and we need to be willing to name white supremacy so we can dismantle it. That’s the non-racist version of “telling it like it is.”