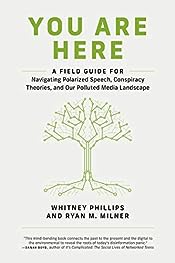 It’s here! You Are Here: A Field Guide for Navigating Polarized Speech, Conspiracy Theories, and Our Polluted Media Landscape by Whitney Phillips and Ryan M. Milner has been published this week (MIT Press, March 2) and it’s wonderful. Throughout the book, the authors use the natural world and the threats it faces as a metaphor for the network “pollution” that we all experience, pollution that hardens polarization, distributes misinformation, and knows no borders. This metaphor allows the authors to focus on how polluted information spreads and what to do about it rather than examining motives or assigning political blame; it also points to the unequal social burden of this pollution, similar to environmental racism. Polluted information is nothing new, but in recent years we’ve built a network system that amplifies and spreads it with great efficiency. This polluted environment (one the US is particularly responsible for building) is one that is interconnected and one we all share, so it requires a communal effort to restore it to health. You’re here. I’m here. What we do affects us all. The authors write:

Without question, it’s difficult to linger on the chaos and uncertainty of our dizzying political moment. It’s difficult to linger on rancor and abuse. It’s easier to look away, or at least to point our fingers elsewhere, to social media companies, to media manipulators, to bigots, to politicians, to journalists, to the people we disagree with. We invite you, instead, to run towards the storm. To reflect on roots connecting to soil connecting to sky, and all the overlapping energies that collapse one thing into another. To situate yourself and within the network map, one ever-moving dot among hundreds of millions of other ever-moving dots, all feeding into and being fed by social media companies and media manipulators and bigots and politicians and journalists and people we disagree with. To consider your responsibilities to your neighbors and your neighbors’ neighbors.

The authors provide some history of how misinformation can spring from “deep memetic frames,” stories that are told again and again to give us meaning, particularly in times of stress. They start long before the invention of Facebook and YouTube, with the epidemic of Satanic Ritual Abuse which didn’t actually happen but was widely believed in the 1980s and early 1990s, providing a story about a deep conspiracy to abuse children that spoke to a moment when cultural mores were in flux and women were entering the workplace while their children were entering daycare. (Interestingly, the argument I made for highlighting information systems and how they  in information literacy instruction recently published in The Atlantic, adapted from a Project Information Literacy Provocation Series essay, was one I first made back in 2003 by looking at media coverage of this moral panic. I thought it was important to think about how different systems decide what stories to tell and how claims are verified using this bizarre moment as a case study. Just add understanding how stories are selected and validated in a bifurcated news environment, algorithmically amplified through social media and . . . well, here we are.) These frames ran deep, but were not connected to media networks the way they are now, without filtration barriers or natural impediments to how far they can reach.

In the next chapter, the authors examine how early internet culture, particularly in the US (contrasted to the internet was imagined and used by the communalist Zapatista movement) was influenced by a particular American individualism coupled with a raucous and raunchy vernacular that legitimized cruelty and insults and blurred the line between seriousness and lulz. It’s the creeping crudity that somehow legitimizes racist and misogynistic expression as “telling it like it is” and led to some 8channers to declare that they had elected a meme president in 2016. This trolling culture became entwined with whiteness (remember, Jessie Daniels has been warning us that white supremacists are really good at the internet for years, now) and with entertainment (new ways to amuse ourselves to death).

The resulting chorus of ironic, nihilistic, fetishistic laughter created the perfect conditions for bigotry to spread stealthily, tucked away within things that didn’t seem polluted at all. That seemed, instead, like harmless fun. As so many otherwise well-intentioned people watched, seeing nothing, trolls and lulz and glitchy art melted into supremacist hatred, like mists melting into branches melting into roots. Once there, its poison could spread, unfettered, from this tree to that, gathering more strength with each turn. Soon it couldn’t be contained and burst up through the sidewalk, into the public square. This process took time, but it wasn’t difficult; internet culture and white supremacy share the same frames. The difference is that white supremacists know they’re sowing poison.

The following chapter digs deeper into how white supremacists sowed their lulzy seeds on soil fertilized by journalists who treated the rise of the so-called “alt-right” as an oddity that fed (white) audience attention, profiling leaders of hate groups as surprisingly sophisticated and even well-dressed, which meant ideas once hidden under robes were given a veneer of legitimacy and a handed a megaphone for their ideas. Ironically, even as the “alt-right” admonished conservatives that the press was the enemy and couldn’t be trusted, they manipulated the press into legitimizing them through coverage. Every story that validated the movement was a win. With “The Gathering Storm,” the authors encourage us to face the whirlwind as the “deep state” narrative feeds increasingly ferocious storms of disinformation, the hurricanes that have gained magnitude as the environment is super-heated by the distorting effects of algorithms that create audience-algorithm feedback loops, thanks to engineering of attention and anger that is so very profitable.

The final two chapters address what we can do to mitigate this crisis. We need ecological literacy for our media landscape that goes beyond the individual-focused critical analysis and fact-checking practices previously forming media literacy instruction in school (practices that have in many ways been adopted by conspiracy theorists who urge us all to challenge authority, think critically, and “do the research” though mostly by consulting their own data-void-filling sources). Instead, the authors advocate for network ethics that is informed by understanding our interconnectedness and need to care for one another to have a future.

. . . ecological literacy emerges from network complications. It foregrounds the downstream, communitarian consequences of falsehoods and facts alike. And it takes people’s frames seriously. These frames might not be true, but they are real; they shape how people navigate the world. Understanding these frames—indeed, approaching them as basic features of the information ecosystem—is key to protecting our public lands. To get us there, ecological literacy zooms out, way out, to survey the entire landscape. . . . The problems we face are structural. To cultivate enduring solutions, we need legislative action, economic restructuring, and educational reform. We’re not going to get any of that overnight. We can, however, begin cultivating a different, more robust, and yes, more rational way of situating ourselves within the networked world.

As the pandemic took root, mutual aid networks emerged. Many of us are afraid or angry or despairing that our differences have grown so deep. But most people are people of good faith. If we can figure out where we are, we can begin to understand the networks that we share.

When we know where we are in relation to everything else, we’re in a better position to consider the consequences of what we do and say (or don’t). Offline, we do this by looking up, looking down, and looking side to side. Online we can do the same thing, just with a more poetic eye: by charting the roots below, the land around, and the storms above.

Looking down at the roots beneath our feet helps us trace where polluted information came from and how it got there. What networks has the information traveled through, and what forces have pinged it from tree to tree, grove to grove? This pollution might be economically rooted, grown from profit-driven corporate institutions. It might be interpersonally rooted, grown from long-held assumptions about what’s acceptable to share, or funny to share, or necessary to share. It might be ideologically rooted, grown from the deep memetic frames that support people’s worldviews. The trick is to remember that polluted information never just appears. Pollution filters in, driven by countless catalysts. When trees start dying, when they fail to flower, when their leaves go brittle—that’s the symptom. The cause is how and why that pollution spreads. Neither symptom nor cause makes any sense without the other . . .

This, in the end, is what the “you are here” map reveals. The networks of networks comprising our intertwined lives, the speed with which information travels, the effect of that information on so many unseen others, beats with reciprocity, and therefore with responsibility. If we choose instead only to see the rights we have, rather than the space we share, then the forest will die, and we will die with it.

It doesn’t have to be that way. We can choose, instead, to tend the land wisely, acknowledging always that our fates are connected. Quietly, slowly, and with sincerity, we get there working side by side, piling small things up until they’re big.

I recommend this book to every librarian or media studies educator, everyone who cares about media literacy, and to anyone who’s trying to figure out how we got here and what we can do about it. It’s beautifully written and erudite without being intimidating. Students could get a lot out of it, and the authors kindly shared an earlier version of it (which seems largely to match the finished version) using MIT’s open access publishing platform, so a portion could be assigned for discussion without raising student costs. And if that still seems like still too much reading to add to a syllabus, Phillips wrote an article for Wired that recaps the argument in brief.

But do yourself a favor and read the whole book.