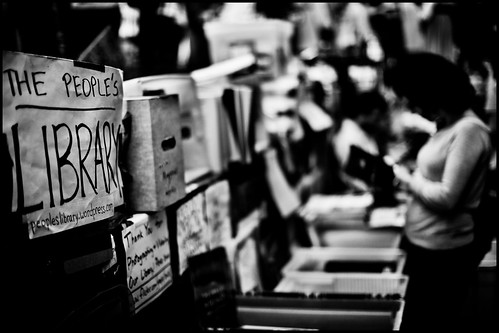 In honor of the tenth anniversary of Occupy Wall Street, I’m reposting a piece from Library Journal from when I wrote a weekly column that was open access but is now a bunch of 404: Not Founds. Thank you, Internet Archive, for saving it! And congratulations on your 25th anniversary.

In the first news stories, the fact that Occupy Wall Street had a library seemed a bit whimsical, sort of like that iconic photo of a dancer perched on the back of the equally iconic statue of a charging bull. How funny! A library for a group that has no leaders and no rules? It seemed to some a contradiction in terms. Aren’t libraries all about rules and organization?

Well . . . no. Libraries are fundamentally about something quite different. It seems natural to me that a social movement that springs up locally and without any centralized organizing body or criteria for membership would create a library. This is an impulse so ingrained in the idea of books that people are creating tiny lending libraries to put in public places as signals that sharing books is an important act, something that creates community.

So the Occupy Wall Street movement quickly acquired a library – not because information is needed. What with Google, Twitter, Facebook, and various streaming video sites, the movement is awash in information. It’s more a way to define the community through a culturally meaningful form of sharing, a physical impulse to pass books from one hand to another. It’s what you do when you come together: you pool your books so that they can be browsed and shared. Sharing books is communal nourishment, like breaking bread.

As I write this, I see that the Occupy Wall Street library has over 3500 books cataloged at LibraryThing. It also has policies and procedures, as libraries do. These include how to close the library when it rains (put lids on the boxes and tuck the tarps around them in a manner that won’t aggravate the police) and it has circulation policies, including how to check books out forever: “these books belong to everyone, so we trust everyone to do what they think is most effective with them. If you think you could put a book to good use long-term, by all means keep it. If you think others might benefit from it more after you’ve finished, we strongly encourage returns.” I love that.

These books belong to everyone. There’s enormous trust embodied in that statement, and it’s the kind of trust that at times is betrayed by rules designed around the assumption that people will act selfishly if allowed to govern themselves. As David Carnevale wrote in his article on “organizational trust” in the Encyclopedia of Public Policy and Administration, “bureaucracy is a monument to mistrust.” Luckily, it’s not the only option: he points out that “governance systems can be crafted that take advantage of people’s best, not their worst, tendencies.”

There is a tie between these loosely organized boxes of donated books and the intellectual history of libraries. In a short film, Matthew Battles (author of Library: An Unquiet History) compares Occupy libraries with the libraries of the Chartist movement in England, a social reform movement and a precursor to the establishment of public libraries. He points out that libraries of this kind offer access to information, but also a forum where “conversation and reading ebb and flow, where one has the tactile experience of reading, the intimacy of reading that one shares with others.”

It’s not just the books and it’s not just the place where they are collected; it’s a combination of space and information bound together by physical proximity, conversation, and sharing of something held in common. As Battles puts it, “you find this wonderful energy of a kind of charged contemplation taking place. I think that’s a quality that a library offers us as a space, a space we make together out of books and our reading of them-and the intuition of the Occupy movement to build libraries resonates deeply with the history of progressive change.”

Another writer who has commented on the library and, more broadly, how Occupy Wall Street is sorting out its civic arrangements, is a blogger named Jed-Jedediah Purdy, professor of law at Duke University and author of A Tolerable Anarchy: Rebels, Reactionaries, and the Making of American Freedom. He opens his blog post with the observation that “as an approach to library science, anarchism is at its strongest and its weakest.” The library’s work is done by fastidious people who organize the books into a system that is not a system, creating a lending library that believes people will share willingly, so doesn’t require returns. The movement’s means of debating ideas, he goes on to say, would be familiar to the men who had to devise new democratic ways to make decisions as they debated the language of the U.S. Constitution.

In my dystopian moments I wonder whether such a library will even be possible a few decades from now. We seem to be willfully careening toward a future when the people can’t own books; we will only be able to purchase temporary access to them. Under such a regime, the very idea of sharing may have atrophied. It may only linger as an offense under the criminal code.

But the appearance of Little Free Libraries and the libraries springing up at Occupy sites reassures me. In our day to day work, we may feel that the people we serve just want us to provide them with the stuff they personally want, whatever the cost. We may feel trapped between intellectual property owners and greedy consumers who aren’t interested in our problems. We may be nearly ready to give up the fight for intellectual freedom that nobody seems to care about but us.

But these spontaneous libraries say otherwise. People want to share. It’s a democratic impulse. It’s one we need to preserve and encourage.

2 thoughts on “Why the Occupy Wall Street Movement Had Libraries”