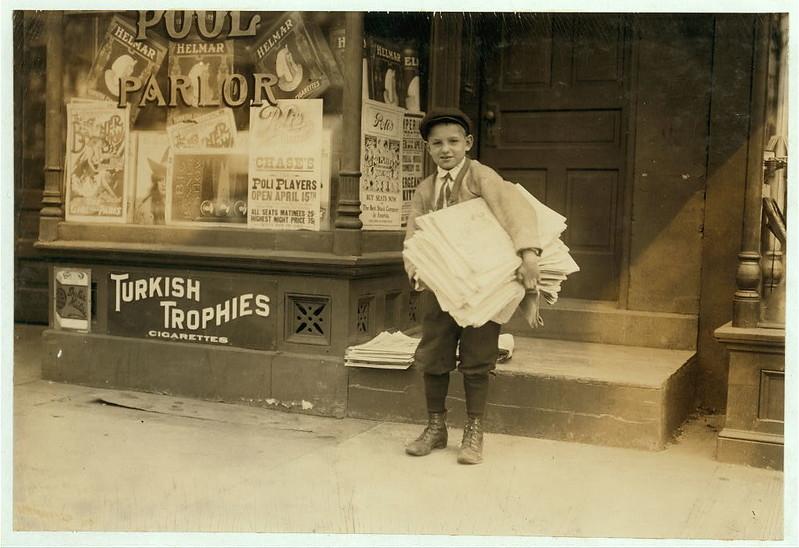 While doing some research, my partner got into a trove of old newspaper content. He idly tried searching family names and found an amazing number of mentions: birth announcements that listed every sibling’s name, meetings and election of officers of local organizations, a new job, the minor injury of a child (now in his seventies) in an accident. There was even a short article about a local man who was mentioned in a textbook my father wrote. Something important to an individual was considered worth sharing with the wider public.

I remember going through 19th and early 20th century articles in a small town paper years ago and seeing a weekly column that detailed who was visiting whom from out of town – that was news in an era when travel was difficult – but the newspapers my partner was looking at served sizable cities. These mentions were typically brief, just a sentence or a name in a list of names, but they indicated ordinary citizens lives’ were newsworthy. Through this practice, the newspaper created a web of personal connections that defined a community, day by day. While I’m sure there were major gaps and entire overlooked neighborhoods, it was a way that a city told a collective story about aspects of life that are no longer considered “news.”

“It’s like the social media of its time,” my partner pointed out. “But it’s different now.”

It’s different because we don’t have enough reporters to collect these stories anymore. Because people don’t turn to institutions to record their lives these days; instead, they use platforms to compose their own stories (which won’t be preserved as newspapers were). Because of the shift in our culture marked by a self-branding turn (it pays to get attention) and hugely profitable industries built on capturing details our lives as raw material (we pay with our attention).

The platforms we use deny that they are publishers in order to avoid the work of publishing, which includes deciding what not to publish. Of course, every social media platform takes steps to suppress stuff. They have to. Imagine what your email inbox would look like without any spam filter: useless, broken. So they routinely filter and take out the garbage, but they don’t want to make hard calls, and they don’t want to be responsible for not making them.

Absent shared norms and institutional gatekeeping, we have exchanged the ethics that guide, however imperfectly, journalism, science, and scholarship, for principles of marketing. We are brands, our cities are markets, our purpose is promotion and profit, or at least that’s what the designers of the platforms imagine is the guiding principle of human interaction.

We have fulfilled the prophecy made by Neil Postman that we would amuse ourselves to death, making all of our channels of communication into entertainment. Along the way we’ve turned civic life into gladiatorial combat, a blood sport that has consumed politics and driven us into armed (in some cases literally) camps.

All of which is to say . . . well, I’m not sure. We can’t return to an innocent age when the local paper saw ordinary lives as newsworthy because local news is far too stretched and people don’t turn to the papers for announcements and small news these days. Besides, we know that innocent age really wasn’t, anyway. But what we have now has been so bent and broken by fundamentalist capitalism and by wealthy interests’ long game of building up an information and political infrastructure that serves their interests, that it’s hard to know how we’ll recover.

danah boyd has written about how the market segmentation of political and cultural perspectives, amplified by Facebook, mirrors  the growing segregation of our civic lives in other realms: the military (once an engine for encountering people unlike oneself, now intensely privatized post 9/11), college (no longer a source of social mobility but rather of stratification), and I would add k12 education, (wholly resegregated), and housing (because of the palimpsest left by enduring red lines and the ways wealth leaves the neighborhood –or returns to coopt it through gentrification). We also know that political leanings have become firmly entangled in identity, including religious beliefs. And while I have been skeptical of the “bowling alone” thesis, there do seem to be fewer chances for neighbors to know one another or hold things in common, just as there are endless opportunities to find and spend time with affinity groups online. As boyd puts it, “what Facebook does do is mirror and magnify a trend that’s been unfolding in the United States for the last twenty years, a trend of self-segregation that is enabled by technology in all sorts of complicated ways.”

Where local news once created a web of connections among people based on the city they lived in, making the minutia of lives into news, giving residents a sense that their lives were connected to others’ and to larger events, it’s now fighting for its life. What we will lose is not just statehouse reporting or the likelihood the locally powerful will be held accountable, as important as those things are, but also the sense that we’re part of something shared with our neighbors, that we have things in common. That what happens at home to us, and what happens to our neighbors in our unremarkable lives, is news, and is worthy without being part of the monetization of our every expression and interpersonal connection.

Photo of a newspaper boy in Washington DC, 1912, taken by Lewis Wickes Hine, courtesy of the Library of Congress.