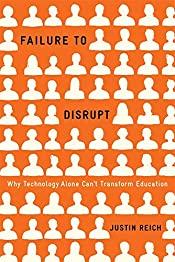 . . . it just eats budgets, deepens inequality, and gathers enormous amounts of data (while often invading students’ privacy in new ways). Earlier this fall I read Justin Reich’s Failure to Disrupt: Why Technology Alone Can’t Transform Education, and I had the opportunity to ask the author some questions as part of Project Information Literacy’s Smart Talk series. The book is a very thorough and even-handed overview of how technology has been introduced into classrooms, first examining how these technologies approach learning (massive online courses, computer-aided personalized learning, and using technology to build learning communities) and then unpacking the problems that have hindered tech’s promise. These have only become more obvious since the pandemic sent students and teachers home and Zoom became a common verb for online interaction.

Technology hasn’t changed the ways people teach so much as it has fostered a virtual simulacrum of traditional teaching practices. Rather than creating more access to learning opportunities, an old myth of digital democracy, it gives the rich more opportunity than they had before, and will diminish what the poor get from schooling. Routine assessment measures what is easy to measure rather than the kind of learning that people will need as automation takes the easy work away from us, and being able to gather so much data has “toxic power” (though Reich also offers a brief for data-driven educational research). If you want a thorough exploration of what we’ve learned about edtech from someone who believes in its promise, but not in the hype, this is a solid overview that will tide us over until Audrey Watter‘s long-awaited book, Teaching Machines, comes out next summer.

There is one section of Reich’s book that I keep thinking about. In “Teaching Hate on the Open Web” (pp. 97-101) he rounds out a discussion of peer-guided learning at scale, which is the approach to using technology in learning that most appeals to me – having studied reading communities online, I have a lot of respect for self-directed community formation around shared interests that build up volumes of shared information and knowledge practices. He points out that communities also form very effectively around grievance and hate. As he puts it,

. . . it’s useful to realize that incels and other advocates of male radicalism have built a sophisticated online learning environment on the open web – hidden in plain sight – that has much in common with connectivist-inspired learning environments: it is a distributed network of people and resources that seek to invite new members to join them in a community n which they will learn new ideas, knowledge, and skills (p.99).

So much radical and conspiracy-theorist thinking promulgated online does seem to be scratching an itch to learn and to belong to something meaningful. (It often is selling merch, too – health supplements, prepper gear, books, or campaign flags and hats, but it so often attracts an audience by promising a search for meaning outside the walls of a classroom.)  Influencers like Stefan Molyneux and Jordan Peterson give lectures about (supposedly) philosophy and psychology that give young men a sense of learning something profound in a mode that’s dressed in a kind of seriousness that seems intellectual even as it disparages academia and “political correctness” – i.e. objecting to expressions of sexism and racism. “Research it yourself” is the mantra of flat-earthers, anti-vaxxers, and QAnons. Why is this brand of learning so much more compelling than the traditional liberal arts? Why is “research it yourself” for hours on end inviting when school-versions of information literacy is . . . not? Is there a deep well of curiosity and a need for meaning that formal education has somehow missed? Is it that education has become tainted with “elitism” or that one kind of learning offers ambiguity and the other promises certainty? Or is the messages that appeal – men are superior to women, whites are smarter than non-whites, the system is rigged against you but where we go one, we go all? Given the way at least some people fall into these networks, I don’t think it’s just a case of hearing what you already believe, and it’s not just technological determinism. As Cory Doctorow has pointed out, Facebook isn’t a mind-control ray, but it does give those who want to control minds an opportunity to find those who are susceptible to the messages you want to send.

MOOCs didn’t turn out to be the disruptive innovation that proponents expected. Watching videos on a computer instead of sitting in a lecture hall wasn’t a transformative learning experience. Yet the “sophisticated online learning environments” created by right wing internet influencers and communities seem to be quenching a thirst that educators can only dream about.

To further draw on Doctorow’s analysis, perhaps the significant difference between traditional education and conspiracy-theory learning environments is the “moral recklessness” shared by ad-driven tech platforms and those who use them for persuasion. Could educators offer a moral alternative?